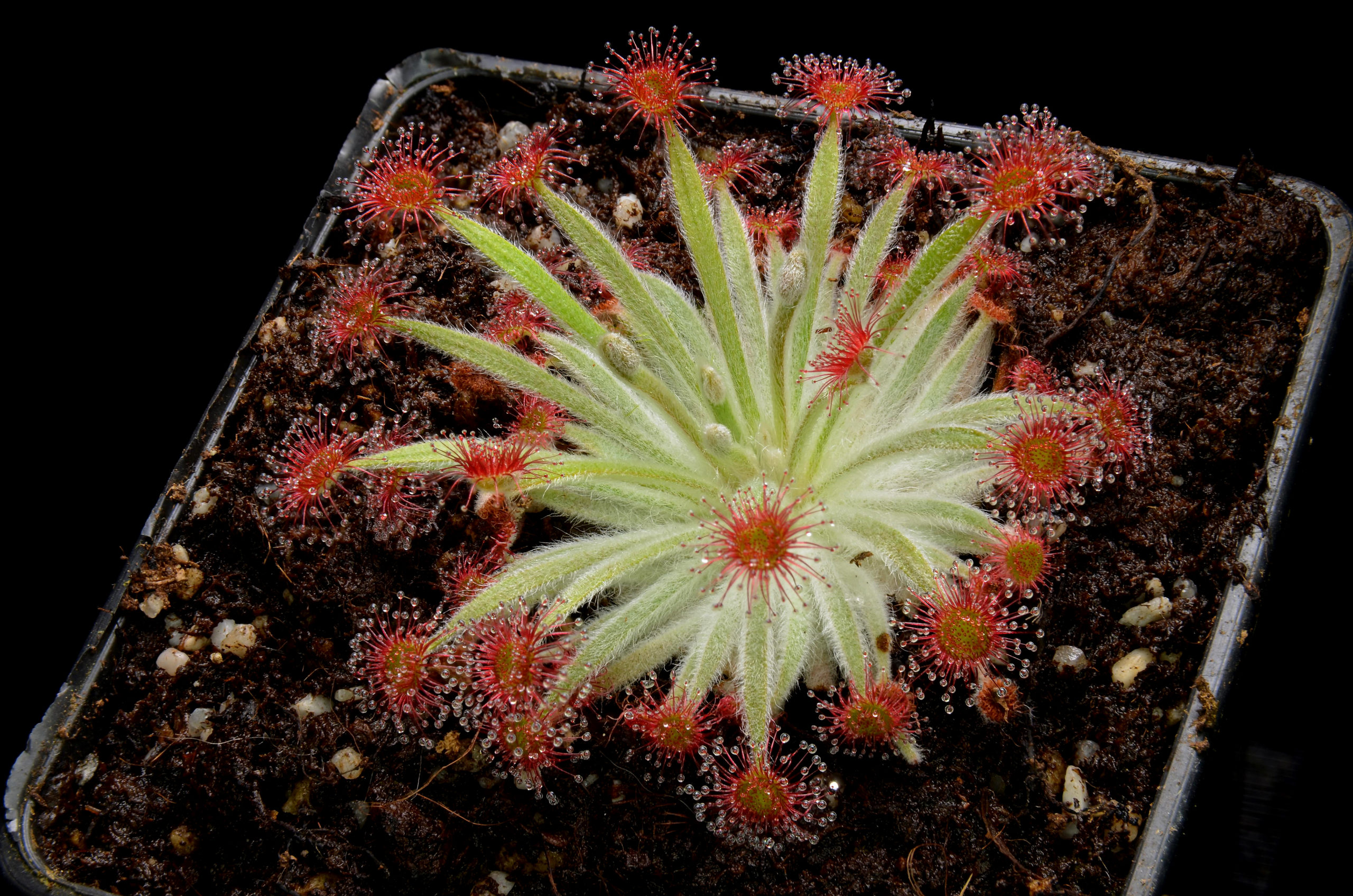 The Drosera subgenus Lasiocephala, also known as petiolaris complex is a group of 13 oddly shaped sundews with long petioles and round traps. Some species are equipped with a dense coat of grey dendritic hairs. They are found exclusively in Northern Australia where the climate is defined by its dry-wet seasons.

In their habitat, these plants grow during the warm, wet winter and undergo dormancy during the scorching dry summer. In cultivation, they can be kept constantly in their growing state as long as the conditions stay ideal.

During the growing season

The trickiest part about growing them is their constant need for high temperatures. Ambient temperature should ideally be kept at a minimum of 25°C during daytime and 20°C during night-time. They can sustain temperatures over 35°C as long as they get enough water and air humidity. Never go under 20°C for too long as this will induce dormancy.

Drosera paradoxa is a bit more tolerant of lower temperatures than the other species, but it’s still best to always keep it over 20°C.

If you live in a temperate region, indoors temperatures are often too cold during the winter. As a result, most people choose to grow them in terrariums in which it is much easier to regulate the temperature.

There are a few tricks you can use to keep your plants warm. I personally run a heating cable for aquarium under the pots combined with a thermostat. You can also place your light inside the terrarium, although you should make sure they are rated for working in humid conditions. Placing the terrarium next to a radiator is also a good way to reach temperatures higher than the room temperature.

You will need a very strong light source to grow them. These days we usually recommend to use LEDs instead of T5 tubes, but in this case T5’s could help keeping the temperatures high as they tend to emit a lot of heat.

Keep the photo-period under 14 hours per day as to mimic the winter daytime hours.

Use a very well drained soil composed of 3/4 sand and 1/4 peat. All that sand makes sure that not too much moisture gets trapped into the pot during the dry dormancy. It also is much easier to re-hydrate than peat which tends to become hydrophobic when dry.

Always keep a few centimeters of water under the pots. If the soil gets too dry, it will trigger dormancy. Make sure that their relative air humidity is above 50%.

Feeding them is not required, but doing so will speed up their growth and help them flowering. We recommend spraying them with a solution of Maxsea 16-16-16 every two weeks. Any insect will also do the trick, given that they are small enough to stick to the smaller-than-usual and not always very sticky trap that these plants have.

Drosera falconeri is particularly fun to feed as it folds from both sides of the trap towards the center, reminding of the way Dionaea muscipula closes its traps.

During the dormancy season

Multiple factors can induce dormancy such as temperatures that are too low/high or a soil that is too dry. This dormancy is absolutely not required and plants can be kept in their growing stage all year-round, but sometimes plants can still decide to go dormant.

The leaves will start shrivelling, leaving only the growth point alive within a bunch of hairs, protecting it from the harsh summer conditions and helping it collecting water from the air. Drosera kenneallyi and Drosera falconeri are slightly different, in so that they form a hairless bulb just below ground. Dormancy can last from 1 to 6 months depending on the species and the environmental cues.

Ideally you should provide very high temperatures during this period but it is not necessary. Heating an additional terrarium at 40°C for a few plants in dormancy is not worth it, and so most people just keep them at above 20°C during that time.

At the beginning of the dormancy, remove them from standing water and then only water them from the top once every two weeks. If kept too wet, the plants might rot. Hairy species seems to tolerate moisture better than the glabrous ones.

You can increase the photo-period up to 16 hours per day, but it is not necessary.

Getting them out of dormancy

Once the plant decides it is ready to come out of dormancy, it will unfurl its protective rosette to expose the growth point which will start to turn green. At this point, you can switch back to regular growth conditions and resume abundant watering.

This website uses cookies to improve your experience while you navigate through the website. Out of these cookies, the cookies that are categorized as necessary are stored on your browser as they are essential for the working of basic functionalities of the website. We also use third-party cookies that help us analyze and understand how you use this website. These cookies will be stored in your browser only with your consent. You also have the option to opt-out of these cookies. But opting out of some of these cookies may have an effect on your browsing experience.
Necessary Always Enabled
Necessary cookies are absolutely essential for the website to function properly. This category only includes cookies that ensures basic functionalities and security features of the website. These cookies do not store any personal information.
Non-necessary
Any cookies that may not be particularly necessary for the website to function and is used specifically to collect user personal data via analytics, ads, other embedded contents are termed as non-necessary cookies. It is mandatory to procure user consent prior to running these cookies on your website.
SAVE & ACCEPT

Thanks everyone for all your orders in 2021! We are now in winter break, during this time orders are disabled. We will open back in spring 2022! Dismiss